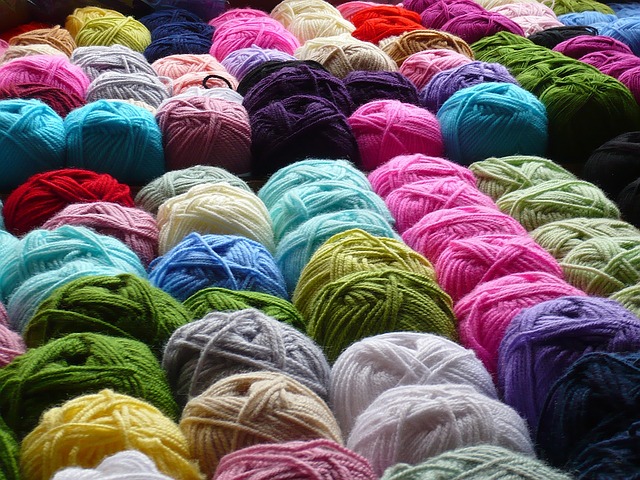 Does this describe how you find yarn? You go to the typical shelf at a local department store? You know the shelf – it is tucked in the middle of the craft section between fabric and scrapbooking. The shelf that is loaded with all the synthetic acrylic possibilities you can imagine and in a variety of colors. You go to that ball on the shelf and pick it up only to find feels rough yet waxy. Is this even going to feel nice against your skin?

This was where I began my knitting journey as well. I would go for color instead of feel and would pick whichever variegated ball of yarn that would create the most whimsical item I could knit. The problem was the colors would pool and then the item would look like clown-barf (clown-barf is a well-known term for when a skein or ball of yarn pools in such a way that you don’t know where to look first and the colors blend like a clown’s rainbow wig exploded). My first knitted rainbow clown-barf hat is somewhere in my house and it has never been worn.

What drew me out of this acrylic and haphazard yarn world? A local yarn store had a closing sale and I was launched into a gambit of options. I cannot remember who told me about the store, but I can say that I was saddened to have a door simultaneously opened and closed during my knitting journey. I picked up many yarns and was transported to a place of softness and luxury. One of the yarns I chose was Noro Silk Garden and it has been my favorite ever since.

Noro Yarn was founded in 1973 by Eisaku Noro. His quote best describes why I love this yarn so much (translated from Japanese), “In order to make yarns with good texture, that is, “softness,” “lightness,” “thickness,” “tension,” “feel,” and “color”, “gloss,” “good knitting,” we fully understand the characteristics of each raw material. After that, we have blended several kinds of raw materials to achieve the best composition.”

Noro Silk Garden is not the softest yarn available but when you see how many natural fibers went into its beauty, it is easy to forgive.

I would personally describe this yarn as if the yellow brick road slowing changed color along the way from Dorothy’s house to Emerald City. There is no awkward drop-off between colors and when used with the right project, it can create some very interesting effects.

By using two different balls of the Noro Silk Garden yarn in a striped pattern, a deceivingly complex creation occurs. Jared Flood, a well-known designer within the knitting world, has a version of a Noro Striped Scarf on Ravelry . It has been saved in 5574 queues and has 15595 completed projects.

This was my first project using this newly found yarn, completed in early 2009. I used a Green/Blue mix combined with a Browns mix trying to emulate one of Jared Flood’s projects. Sidebar – it was a great project to knit while studying my undergrad.

Another great use of the Noro Silk Garden for striping is when you use it alongside a solid color yarn. When you do blocks of solid color with thin rows of Noro Silk Garden, you create a material with stripes of color from one ball versus having to change balls every so many rows. This effect is shown in the Turn a Square Hat Pattern by the above mentioned Jared Flood and it was my second project completed in late 2009.

Lastly, the most intricate use of Noro Silk Garden that I came across was when it was used for a pattern called Entrelac. Entrelac is a series of interlocking squares and triangles that make the fabric look like it a series of woven strips. It is complex and can be difficult for knitters to learn but when using Noro Silk Garden, the pace of color changes helps you maintain your sanity. I created the below entrelac blanket as a wedding gift originally but was convinced by a fellow wise knitter to keep my precious creation. It took from 2010 – 2012 to complete and it was a blanket-sized adaptation of the Entrelac Scarf by Allison LoCicero.

I never had the chance to tell the owners how they impacted my future as a knitter, but I celebrate them every time I choose Noro Silk Garden for a project, not just any available yarn.

Post written by Catherine McKittrick who you can find on ravelry