What happens if you didn’t vote for president trump? Or you did but your views of him have changed? It’s 4 years until the next presidential election. What do you do? One solution is to make an app. Elliott Killian made a game app about recent political events. She Persisted is not just a movement but also an iOS app available for the iPhone and iPod. What is She Persisted? Where did it come from?

Where did the name She Persisted come from? During Jeff Sessions confirmation hearing Senator Elizabeth Warren read a historic letter from Coretta Scott King in opposition to Jeff Sessions from becoming a federal judge. Senate Majority Leader Mitch McConnell stopped Senator Warren from reading the letter with a senate vote. This silenced her for the rest of the hearing. Here is what Senate Majority Leader McConnell said:

Senator Warren was giving a lengthy speech. She had appeared to violate the rule. She was warned. She was given an explanation. Nevertheless, she persisted.

The surprising thing was that it is not obvious she was breaking a rule. The letter she read was in the 1986 congressional record and after Senator Warren was silenced other senators went on to read the letter in its entirety. This issue highlighted the power difference of gender in our society even in government.

The phrase: “Nevertheless, she persisted” was made into a meme and a Rallying cry for supporters of Senator Warren. Later it was used on signs in the women’s march. The event and message have a larger meaning of how women are viewed and treated. Daniel Victor of The New York Times points out; “A broader theme—that women are too commonly shushed or ignored—emerged on social media.”

Already a buzz on twitter and Reddit. Featured on bgr.com and the Drippler app. She Persisted the iOS app has a female main character that is trying to get to a hospital. Walls block some of the path. Moving around the walls she also has to avoid trump from grabbing her. To move you must move and tilt the screen to win. 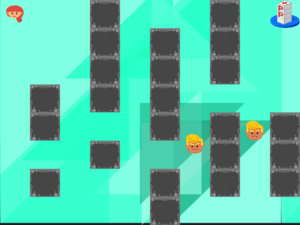 We asked Elliott Killian the creator why he made the app. “I believe it is better to take action than to react. This [She Persisted] is how I am taking action.” Not everyone shares Killian’s views. Some have taken to social media to voice their opposition. What did Killian have to say: “If you voted for Trump, support him, or hate my app I encourage you to make an app of your own.”

You can download it for free at the Apple App Store for iPhone and iPad.